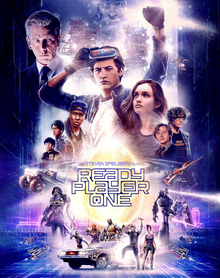 It is a common occurrence that as soon as a book-based film gets released the critics start raving about how much better the book was. Yet we do seem to forget that books and films are two very different media with their own requirements and merits. In the case of Ready Player One, the movie (rather than ‘the fillm’ as Spielberg insisted during its premiere) and the novel function as two completely separate entities. Certain major elements of the plot have been changed, in some cases for the better, in other merely to suit the movie screen, to provide more dynamics, and to cater to, particularly, 3D-watching audiences (hence the insistence on dubbing it a ‘movie’), however, quite like the novel, Spielberg’s creation has failed to deliver any more resonant messages besides the one that it itself symbolises – that wallowing in nostalgia gets you nowhere.

Compared to the book, the movie is definitely more on the funny side, with elements of situational comedy brought to the forefront. It begins in medias res, with a vibrant, exciting race in the very first 10 minutes or so. Cline’s numerable references to the 80s pop culture lend themselves neatly to screen adaptation, nevertheless, the movie merely scratches the surface of the immense ocean of references present in the novel, where the OASIS is dominated by an abundance of nerd paraphernalia from the author’s own childhood. The movie, on the other hand, is much more expansive in its inclusion of nostalgic references to cartoons, movies, and video games as recent as this decade, thus rendering it much more accessible to a wider audience, including the audience that cannot reminisce about the 80s and the 90s. It’s a fitting move for an adaptation that is supposed to attract younger audiences and fill movie theatres, yet both Cline and Spielberg have missed the opportunity to use the wealth of pop-culture to show its impact on the growth and development of a particular generation’s mindset, turning it instead into a mere frolic down memory lane strewn with name-droppings (pun intended).

The basic plot-line has remained more or less the same: the action revolves around saving the OASIS from greedy, manipulative clutches of a large corporation that aims to use it to establish some sort of world domination, since, just as is the case in the book, the OASIS (as its name suggests), has become a haven for everybody who wants to find comfort from a rather dreary dystopian reality. Again, the hunt for the Easter egg is on, and a bunch of teenagers are on a quest to save the world – what exactly they’re going to do after they accomplish their mission is quite vague, but we know that they are on the right path.

Spielberg makes a significant improvement on Cline’s somewhat flat approach to characterisation, of female characters in particular. He bestows a much more dominant presence upon Artemis, who doesn’t hide behind her avatar during the entire movie, as is the case in the book, only to present herself as a self-conscious weakling with a birthmark. In the movie, she owns it and flaunts it, charging powerfully through armies of Sixers and overcoming a bunch of obstacles. Furthermore, unlike the book which is quite devoid of emotion, the movie incorporates the emotional dimension to the characters’ motivation making the whole quest much more purposeful.

Still, the movie presents the same quandary as the novel – what is going on with the real world in the meantime? The year is 2045, the world is tumbling down, and the people, as the dismal life in the Ohio stacks suggests, seem to have turned their backs on their physical surroundings. It is quite unclear how the good guys’ victory is going to improve the existing situation on Earth (in addition to releasing the indebted Sixers). The movie’s humorous approach enhances the ridicule of escapism into a virtual reality. Eventually people have to unplug and return to their dreary realities and the message, quite relatable to our current state of affairs, is that the real world and its problems don’t disappear or become any more malleable after you binge-watch Netflix or conquer an entire army single-handedly on your gaming console. 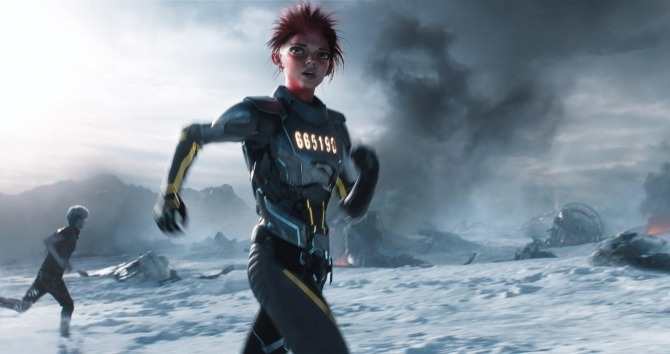 The ending is still a cheesy disappointment as vast as the OASIS itself. Very clearcut: the good guys get everything, and they share it amongst themselves, they are all just and fair, and nobody’s selfish and power-hungry. The protagonist gets the money, the power, and the girl.The people of the dilapidated Earth accept the rule that the OASIS will be shut down on Tuesdays and Thursdays as meekly as a herd of sheep, despite the fact that the OASIS seems to be the backbone of their economy, it is supposed to be the place where people earn their living and where children go to school. Even those who don’t rely on OASIS for their income, do rely on it as an escape route from their bleak reality. How come nobody objects to this single-handed, single-minded decision? Isn’t this world domination? Tyranny? Hard to say, since that’s where the movie ends – with world not much of a better place than it was at the beginning. What about the villains? The bad guys lose everything and get punished. Predictable. Unrealistic. Shallow.

Finally, one cannot help but wonder, whence all this nostalgia for the past comes from? 1980s, the decade of political turmoil, red scare and communist witch hunts, and the final stage of the Cold War was far from perfect, however, we seem to idolise and idealise it seeking refuge from our own time. It is nice to dwell in reveries from time to time, yet, just like the OASIS users, we have to bear in mind that our only reality is the present one, and instead of seeking ways to escape it, we should be thinking about ways to mend it and make it more memorable, an oasis of coziness for the future generations to fantasise about.

Check out: Ready Player One – A Dystopian Cliché?

iThere are no comments

“It’s no use going back to yesterday, because I was a different person then.” ― Lewis Carroll, Alice in Wonderland